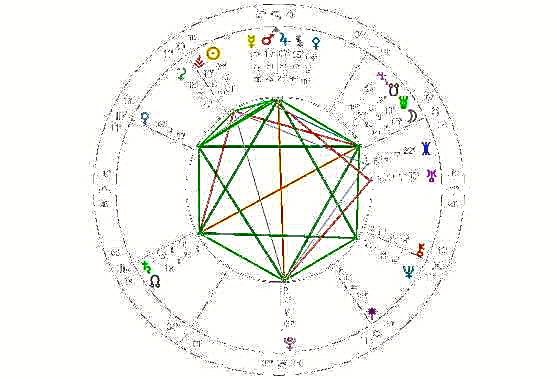 On July 29 a great hexagon pattern appears in the heavens that reflects the nature of the year 2013. This Grand Hexagon is formed by two intersecting Grand Trines including the 3rd Quarter Moon along with the planets Venus, Mars, Jupiter, Saturn, Neptune and Pluto. Generally known as a Star of David this great hexagonal formation is more aptly called the Seal of Solomon because it symbolizes the union of the Sun (Sol) and the Moon. Solomon’s Seal is the western world’s yin/yang symbol. The upward pointing triangle is fire / yang / Sun, masculine nature; the downward pointing triangle (the delta of Venus) is water / yin / Moon, feminine nature. The union of these two triangles is illustrated in Key VI The Lovers, the Tarot arcanum for 2013 (2+0+1+3=6).

Each year is inspirited by a theme and purpose that is revealed by its number, planet of the year, lunar year sign and decan constellation story. 2013 is a #6 Year of the Lovers Tarot Key VI, Saturn is the planet of the year, it is the Year of the Snake and the year of Cetus the Sea Dragon decan constellation (in the 36-year World Wheel of Fortune). Saturn is a planet of focus, structure, and discipline through which great things can be achieved. What was dreamed in Moon Year 2012 ultimately becomes manifest in Saturn Year 2013. First though we must dispel the shadow side of Saturn which is depicted by The Devil, Tarot Key XV. (Saturn’s symbol appears on the Devil’s raised right hand.) Before we can get to the divine harmony represented by the Lovers the chains of the Devil must be broken or removed. The Devil is the collective shadow sometimes called the Dragon of the Age. This is the 7-headed dragon Leviathan of Revelation that appears in Tolkien’s Lord of the Rings as Sauron (another saurian) and as JK Rowling’s Voldemorte who sends his death eaters to terrorize the world.

Saturn retrograde (Feb 18 to July 7) brought out the worst of people and the astral world, Saturn moving forward sets right the world without and within. Saturn rules END_OF_DOCUMENT_TOKEN_TO_BE_REPLACED